Located amidst one of nature’s breathtaking sites – Lake Serenity Boutique Hotel is one of the few localities that would allow you to be on par with nature’s composure and let you find your inner peace.

Surrounded by the peaks of Sri Pada mountain range and several other mountain peaks at Kuruwita – Rathnapura; Lake Serenity truly speaks for it’s name with it’s in and out surroundings. The hotel is the ideal travel destination for anyone who wishes to spend some quality time at one’s leisure.

From the entrance to the lake, the restaurant and the individual rooms – Lake Serenity has the ability to make you feel as if you are wandering in the ancient times but in the modern world. The pathways and the greenery around you would certainly let you immerse in nature’s beauty. When entered from the main royal gates; You will be greeted by a not so camera shy macaw bird with it’s vibrant and joyful personality. The hotel also play hosts for some unique birds – A pair of Swans and several ducks and geese. All of which can be seen wandering in and around the lake at the hotel. I was also told by the hotel’s resident manager that during certain times of the year the hotel gets the opportunity to witness the presence of some of the most unique and one of a kind migratory birds. So if you are a bird lover and would want to see birds while enjoying yourself in a soothing environment; you would find yourself at the right spot in Lake Serenity.

The interior of the room pays homage to old Ceylon creations as the walls display the cracks of the bricks and the doors reveal the patterns on the wood in an artistic manner. The pool is relatively smaller than some of the pools I have seen but it doesn’t fail to give a perfect view of the mountain range. The mesmerizing view and the calming water will drift you into your own little Nirvana.

Apart from the already existing rooms Lake Serenity has also added a new attraction named as ‘Lake Serenity Farm Stay’ – a concept through which you would experience the true Sri Lankan life style. The rooms at Lake Serenity Farms are surrounded by an actual mini farm which grows vegetables and other herbs. Furniture of this room are made using Kohomba (Margosa) wood. The rooms have it’s own little porch and inside that you will see a wide little bench on which you could literally fall asleep accompanied by the cold breeze but I would not recommend doing so as the area is home for not only mosquitoes but also wild boars.

Unfortunately the day I visited Lake Serenity was the day they chose to renovate their restaurant. However I cannot guarantee you that the restaurant would provide you with great meals but a great surroundings. Guests are being taken into the restaurant using a pontoon. Sadly though the ride lasts for not more than five minutes as it ends before you could settle into the experience. I was not highly satisfied with the food even though it was Chinese. I found the food to be a little too oily and spicy. A word of caution though; you may have to keep fanning around you as flies from all corners will come and greet you. 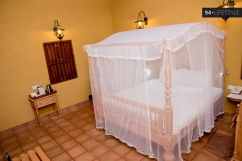 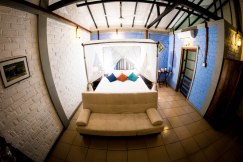 For me it was a one of the perfect places to get away from all the hassle in the city. Oddly for me though the silence around can be a little too intimidating. However if you seek to have a calm and a quiet time – this would be the perfect environment for you. I was told that the current President of Sri Lanka – H.E. Maithree Pala Sirisena along with his family spent a day at Lake Serenity. It got me thinking; If it was good enough for the president then it would certainly be good enough for you 😉

2 replies on “Lake Serenity – A place to find Solace”

Not your usual junkyard 🚛
It's no lie that with Covid-19, we did reach a new level of acceptance. We had no choice but to look for joy in the little things. Sometimes those little things make us reflect on our past. I may not be able to travel, but seeing this photograph, reminded me of how I feel when I am at the beach.
They say that the secret to a happier and a more fulfilled life is to invest in experiences rather than material things. But the question is, how can we preserve those experiences?
Hidden away in the Dedduwa lake, lies a heaven for every architect and artisan. Known to be the home for one of the most celebrated Architects in the world, the Lunuganga Country Estate of Geoffrey Bawa gives an exclusive peek to his lifestyle and inspiration for many of his masterpieces.
You shall live in the hearts that were left behind. #EasterSundayAttacksLK
I believe that this is not the first time Sri Lanka is experiencing a pandemic. Every year we take severe actions to prevent the spread of dengue.
Adventure is not always dangerous 🌤️
Sit quietly and listen to the secrets 🤫
The beauty is not in just waves but in the feeling it leave you with 👣